Liam has brown curly hair, for his X Factor audition he had hair that looked slightly like Justin Bieber's but as he says "Justin Bieber stole my hair!" he then changed to curly hair like Harry's but recently, he has changed it. (see picture on the right)

Liam is very smart and the sensible one in the band (compared to Louis and Zayn).

Liam James Payne (born on 29 August 1993), is from Wolverhampton, West Midlands, England, UK. Liam Payne was born to mother Karen and father Geoff. He has two older sisters Ruth and Nicola. Liam was born three weeks early. Until the age of four poor Liam was in the hospital having tests done. They discovered that one of his kidneys wasn't working properly and it had scarred. As a child he had to have 32 injections in his arm in the morning and evening to try and make him better. When Liam went to junior school, he had "grown up a lot" and wasn't the "naughty boy at school anymore".

As a student Liam tried for school teams. He eventually tried out for the cross-country running team and he came first in the race. "From then on I was training all the time and getting up at 6am to run for miles. At the age of 12 they put me in the school's under-18s team." Liam was picked on as a student and "needed to find a way to defend myself." He took up boxing lessons. "I was, at 12 years old, fighting the 38-year-old trainer. I broke my nose, had a perforated eardrum and I was always coming home with a bruised, puffy face. But it gave me confidence. I got pretty good over the next couple of years."

He was a music technology student at City of Wolverhampton College, a Further Education College. Payne had auditioned in 2008 to The X Factor's fifth series when he was 14 and reached judges' houses, but Cowell thought he was not ready for the competition and asked him to come back in two years. This time, Payne auditioned singing "Cry Me a River", and received a standing ovation from the audience and Simon Cowell. At bootcamp, he sang "Stop Crying Your Heart Out" before being rejected and put into One Direction. Due to Payne only having one functioning kidney, Payne: "I have to be careful not to drink too much, even water, and I have to keep myself as healthy as possible." Payne is currently in a relationship with dancer, Danielle Peazer.

Liam in the "One Thing" Acoustic video

With band mates Niall and Zayn. 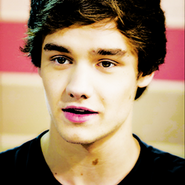 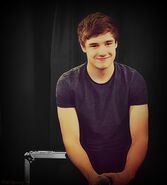 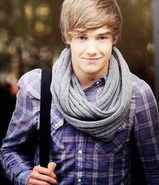 back to school
Add a photo to this gallery
Retrieved from "https://onedirectioninfection.fandom.com/wiki/Liam_Payne?oldid=19851"
Community content is available under CC-BY-SA unless otherwise noted.