Louis has light brown hair that is usually messy, he has sea green eyes and has an amazing smile. He usually wears blue and white striped tee with with red pants and suspenders or "braces" which have become his trademark. He love carrots and that is another one of his trademarks.

He is known as the funny one in One Direction, he loves to make his band mates smile and he constantly messes about.

, England, UK. He was born to Johanna and Mark. He has four younger sisters Charlotte, Félicité, and twins Daisy and Phoebe. He was a sixth form student at Hall Cross School, a state comprehensive school, and a previous pupil at The Hayfield School. As a student at Hall Cross School, Tomlinson starred in several musical productions. In 2010, Tomlinson auditioned as solo candidate for the seventh series of The X Factor. Tomlinson auditioned for The X Factor with the song "Hey There Delilah", and received three votes from the three judges present at his audition. At bootcamp, he sang "Make You Feel My Love" before being rejected and put into One Direction. He currently resides with band member Harry Styles in North London. Louis is often referred to has Larry Stylinson, due to his friendship with Styles. Louis in an interview stated that if he wouldn't have become a professional singer he would have a drama teacher. Louis' parents separated in 2011. Tomlinson is currently in a relationship with Eleanor Calder.

Having fun with Harry! 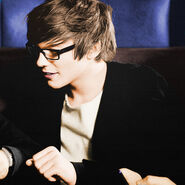 yeah!
Add a photo to this gallery
One direction fan 4ever (talk) 13:23, March 25, 2013 (UTC)
Retrieved from "https://onedirectioninfection.fandom.com/wiki/Louis_Tomlinson?oldid=18241"
Community content is available under CC-BY-SA unless otherwise noted.