Zayn Malik
Zaynster
The Vain One
Member of One Direction!

Zayn has black hair, with big brown eyes. He has both of his ear lobes pierced.

Zayn is the vain one in the band, in the judges house he spent most of his time gazing at his own reflection! He is one of the loudest in the band, second to Louis.

Zayn Jawaad Malik was born on 12 January 1993 in Bradford. His name was originally spelt as Zain but he changed to Zayn because he wanted to. He is 100% Muslim and wearing the cross on his neck was only for fashion.

He has three sisters Doniya, Waliyha and Safaa. He grew up in East Bowling, located approximately one mile south of Bradford city centre. Zayn was a pupil at Lower Fields Primary School in East Bowling and went to Tong High School, a state comprehensive school. As a kid, Zayn was quite a handful as he says so himself. His mum put him in a pram even in the house because he was so hyperactive! Zayn also felt like he didn't fit in at his first two schools due to his heritage, revealing when he and his sister moved schools he felt like he fitted in better, where the school was more mixed. At the age of 12, Malik started taking pride in his appearance. "I had a few dodgy haircuts over the years. I shaved my head a few times and also had slits in my eyebrows. I thought I was properly gangsta, being into R&B and rap, and that it made me look hard."

In 2010, he auditioned as solo candidate for the seventh series of The X Factor. His audition was initially not broadcast, but was shown after the series ended on companion show The Xtra Factor. Zayn was noted for becoming nervous in bootcamp, and when he was told he had to dance, he decided to remain backstage, effectively running the risk of elimination. Simon Cowell noticed Malik missing from the dance routine and went backstage and convinced him to return.[53] At bootcamp Malik failed to qualify for the "Boys" category and was put in One Direction. Malik dated fellow X Factor contestant, Rebecca Ferguson, which caused controversy because of the six year age difference. The relationship ended after 4 months together. In November 2011, Ferguson stated the following in an interview: "Me and Zayn just grew apart. I wish him all the best." Malik has four tattoos, his grandfathers name in Arabic on his chest, a Ying Yang sign on his left wrist, a symbol on his stomach and a peace sign on his right arm.

Zayn in the X-Factor 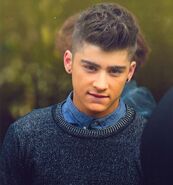 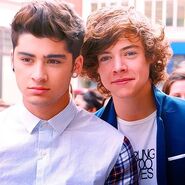 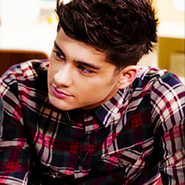 With Liam and Nialler!

Girl look at that body ;) 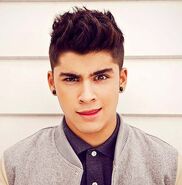 huh?
Add a photo to this gallery
Retrieved from "https://onedirectioninfection.fandom.com/wiki/Zayn_Malik?oldid=18767"
Community content is available under CC-BY-SA unless otherwise noted.